The cobblestone tiny streets, many lovely shops, art galleries and trendy restaurants, Le Marais is a charming historical neighbourhood. Some highlights in the Marais area are the Notre Dame Cathedral, Place des Vosges and the Bastille. We provide a wide selection of self catering short stay apartments of varying sizes and budgets for hire in and around the 3rd and 4th arrondissements. To check availability and location information simply indicate the dates of your visit to the city and click the search button on top of this page. If you need any further assistance please do not hesitate to contact our friendly and professional support team. Below you find our most popular Le Marais apartments and a link to all apartments in the 3rd/4th arrondissement. 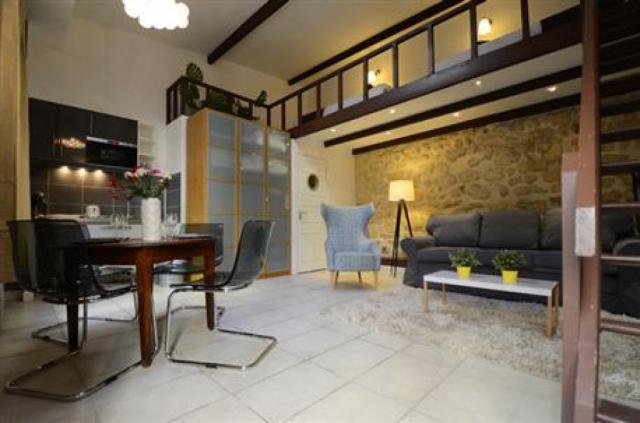 Stylish and cosy Paris studio in the quieter part of Le Marais for 4 persons max.
More about: Temple III Apartment 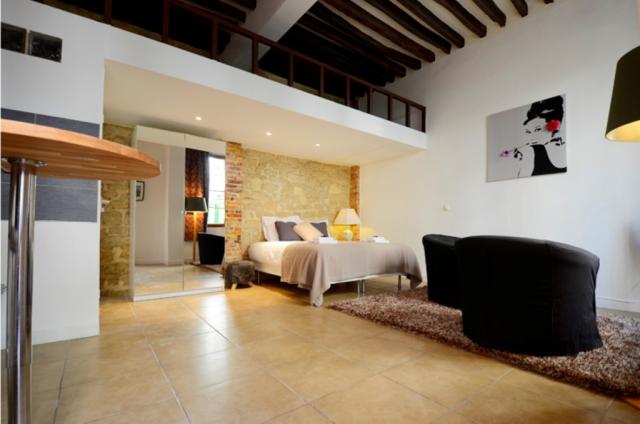 Stylish and cosy Paris studio for 2 in the quieter part of Le Marais.
More about: Temple IV Apartment 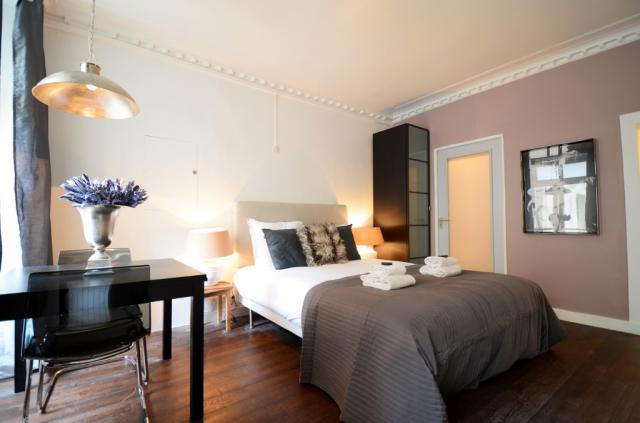 Show all apartments in Le Marais

From Charles de Gaule (CDG) airport station you have the following options:

From Orly airport station you have the following options:

From Gare Du Nord train station you have the following options:

You can find more information and plan your desired route at www.ratp.fr

Most nearby parking options are:

Please do check the Google map for more information about parking options and car free area’s.

When staying in one of our Le Marais apartments these food stores are in walking distance of your self-catering apartment and offer local and international grocery shopping. Not in the mood for home-cooking? In collaboration with our local partners we have selected some excellent restaurants to enjoy lunch or dinner.

One of the oldest areas in Paris and also one of the most central, the 3rd and 4th arrondissement is known as the Le Marais district. Historically the neighbourhood once housed France’s noblemen and their families but today these glamorous 17th century mansions have been converted into museums. The district is known for its pretty little streets, laid-back cafés and boutiques whilst it’s enviable centrality and obvious popularity has driven up property prices to astronomical levels. Staying in this famously vibrant district promises a quintessentially authentic Parisian holiday experience.

The most remarkable point of interest in the 3rd/4th Arrondissement has to be the two wonderful naturally formed islands in the River Seine, Ile St. Louis and Ile de la Cite. The latter is the larger of the two land masses and is most famous for being the home of Notre Dame Cathedral. This is perhaps the most solemn and awe-inspiring of all European Gothic cathedrals and its fame draws many thousands of visitors to the island daily. The building was constructed between 1163 and 1345 and found its international fame through Victor Hugo’s book The Hunchback of Notre-Dame in 1831 and much later the 1939 Hollywood film adaptation. The extraordinary external flying buttresses and the incredible detailed carvings above the front door area are a treat for the eye. Don’t miss the cheeky gargoyles that decorate the upper levels. You won’t be the only person gazing up at the belfry looking for a mysterious figure hiding in the shadows even though the story is of course entirely fictitious. Notre Dame de Paris, its official name, translates as Our Lady of Paris and is a fully functioning place of worship. If you wish to explore inside be sure to check the cathedral’s website for general public opening times to avoid disappointment.

Le Marais is home to the world famous and extremely popular Musée Picasso. With an incredible collection of several thousand of his sculptures, drawings, ceramics and engravings making up the collection, the museum is housed in a beautiful 17th century building. The building itself has its own artistic history since it was the Central School of Art and Manufacturing in a former life. In addition, the museum also presents a handful of works by Cézanne and Matisse.

The district’s Musée des Arts et Métiers offers an enormous collection of scientific machinery, early steam engines and scientific instrumentation dating back to the Renaissance. Children will be particularly interested in the interactive exhibits although admittedly most remain static. It is something of a library of French industrial achievements over the last few centuries but also throws a broader light on the history of technical evolution throughout the world. If science and machinery float your boat then you are in the right place. If it’s not your thing then maybe walk on by and explore the nearby vibrant Bonne-Nouvelle district which is packed with vintage Parisian theatres and concert halls providing you with a broad choice of entertainment options every evening of your holiday.

Le Marais’ extraordinary Pompidou Centre is known by many as the ‘inside-out building’ thanks to its escalators and brightly coloured tubes and mechanics on the outside. It is the largest museum for modern art in Europe and definitely worth a visit. Named after the 1970s French President Georges Pompidou who commissioned the building, it opened in 1977 and has welcomed in excess of 150 million visitors to date. James Bond fanatics will appreciate the building was used as a filming location in the 1979 film Moonraker where it doubled as parts of arch-villain Hugo Drax’s space station. Look out for the famously comical Stravinsky Fountain in the museum’s plaza. It was installed in 1983 and is instantly recognisable to millions of visitors to the city.

The newly renovated Musée d’Art et d’Histoire du Judaisme (Museum of Jewish History) presents the fascinating and often shocking story of Judaism in Europe and North Africa with a particular focus on France. Inside you will find a broad range of engaging and enlightening exhibits including an incredibly ornate 15th century Italian ark and a collection of lithographs and paintings by Chagall and Modigliani which were looted from Jewish households by the Nazis.

Also located here is the famously majestic Hotel de Ville which has been the home of Paris’ municipality since 1357. Effectively the city’s town hall, it serves multiple functions including the location of the Mayor of Paris’ offices and as a venue for large city receptions and events.

An area worth while exploring from one of our Le Marais apartments!

When staying in one of our Le Marais apartments you can just walk and experience all these Paris must sees!